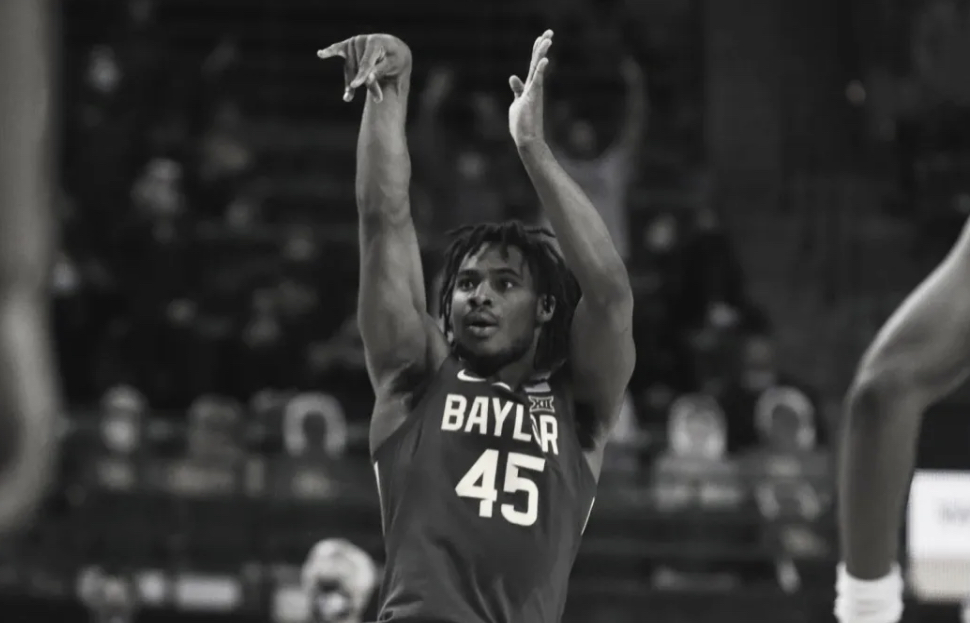 Davion Mitchell the most outstanding player in the tournament, did not let the Bears down this year. He played exceptionally well all tournament and showed up when the Bears needed him most. His ability to hit the three at an efficient clip shooting over 40% from 3, is a crucial part of the Baylor offense. In the Final Four, Davion and the Bears quickly put away an excellent Houston team 78 to 59. Davion did a little bit of everything, putting up 15 points, five assists, and six rebounds in a 86 to 70 win over Gonzaga in the National Championship game.

Jared Butler is an essential piece to the Baylor Bears offense. Jared’s ability to play make and score the basketball make him so versatile on the offensive end. Jared led the Bears in scoring in the Final Four with 17 points and led them in the National Championship game with 22 points. Baylor has a complete team, and when you have a backcourt that consists of Davion Mitchell and Jared Butler, there isn’t much anyone can do in the country to stop them, and we saw that during the last two games of the tournament for them.

Jalen Suggs gave us one of the most incredible shots in March Madness history as he hit the go-ahead 3 to take down the UCLA Bruins. Jalen has been a star for the Bulldogs all season long and led them in some epic battles this year. Going into the tournament, Gonzaga was undefeated and trying to cap off their perfect season. After the UCLA scare, the Bulldogs went into the National Championship as the favorite. Jalen was one of the few Zags that showed up in the National Championship ready to play; he finished with 22 points, three assist, and one rebound. This season Jalen showed why he would be a lottery pick this upcoming draft.

Johnny Juzang and the UCLA Bruins went from the last four into the last 4 left the NCAA tournament when they reached the Final Four. Johnny Juzang put on one of his best performances in the Final Four when he and his team gave us an epic battle against the Gonzaga Bulldogs. In the Final Four game, Johnny put up 29 points, six rebounds, and two assists. Johnny and the Bruins put alot of people on notice on how talented they are.

Drew Timme is the heart and soul of the Gonzaga Bulldogs. From his ability to finish at the rim to him brushing his mustache after a slame he brings the energy the Bulldogs need! In the thriller versus UCLA Drew led all scorers on Gonzaga with 25 points, four rebounds, and two assist. In the National Championship game the Baylor Bears were clicking on all cylinders and Drews 12 points, five rebounds, and three assist werent enough to take down the bears and end the Bulldogs perfect season with a title.

MaCio Teague has an unorthodox jumper but he still shoots over 40% from the 3. The thing that is so special about the Baylor Bears is any given night one of their starters can go off! Its just not Mitchell or Butler that always led the Bears sometimes an X factor like MaCio is what helps the bears secure the win. In the National Championship game MaCio left it all on the court he was the second leadaing scorer for the Bears with 19 points and adding two rebounds to his stat line.

Jaime Jacquez Jr. played a good game in the Final Four along side backcourt running mate Johnny. The UCLA Bruins played a wonderful game its just the nature of sports that their has to be a loser and no one could imagine a halfcourt shot by Suggs will send the bruins home. Jaime played with everything he had in the Final Four scoring 19 points, five rebounds, and four assist in a defeat to the Gonzaga Bulldogs.

Corey Kispert is the player of the year in Gonzagas conference and at times was the experience leader the Zags needed to keep everything together throughout the season. Corey veteran leadership kept the Zags organized and help lead them to perfection all season up to the National Championship where the Bulldogs were defeated by a tough Baylor Bears team that didnt let up one time in the title game. In the Title game Corey contributed 12 points, three rebounds, and two assist. The Stat line never does Corey justice because his contribution to the team goes so much further than just the stat line.

Marus Sasser was one of the only Houston Cougars that came to play in the Final Four. In the Final Four the Cougars were dominated by the Baylor Bears. The little bright spot for the Coguars in the Final Four was Marcus Sasser. He scored 20 points, four rebounds, and two assist. Marcus needed more help from his supporting cast if the Cougars wanted to go to the National Championship the only other player on the roster that scored in double figures was Quentin Grimes who had 13 points.

Cody Riley the 6’9” forward that was a force down-low during the Final Four bringing strength and toughness to the Bruins in a game where they needed it. The UCLA bruins played in one of the best March Madness games in recent memories and Cody came to play. The Forward came into the game and scored 14 points, grabbed ten rebounds, and dished out five assist. Cody was the leader inside the bruins needed to help bang downlow with the lights of Timmie and Kispert. But all that wasnt enough as Jalen Suggs had his One Shining Moment by hitting the Half court shot to send the Bruins home.