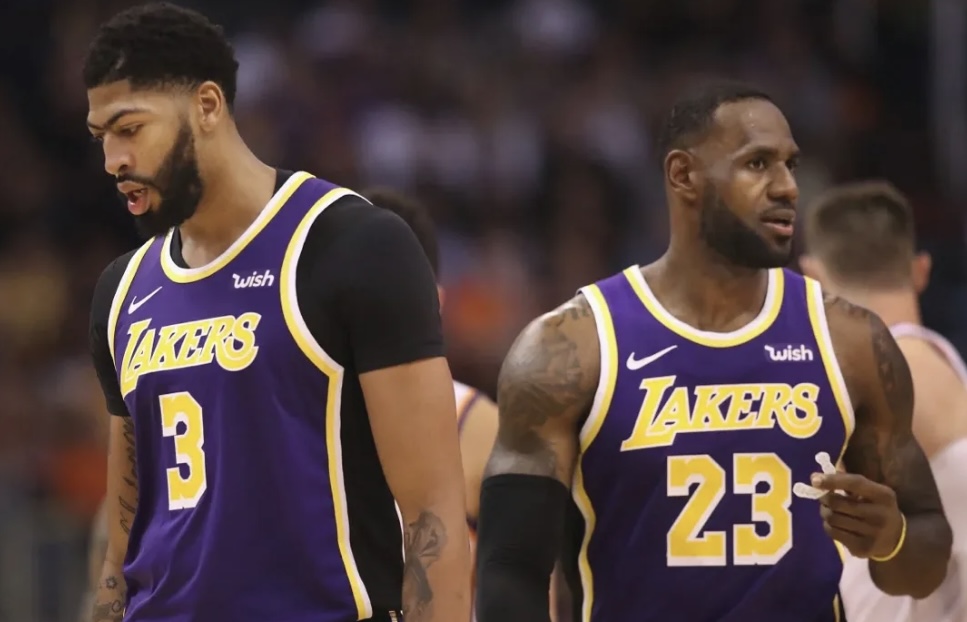 The Los Angeles Lakers have a record of fifteen wins and six losses which currently ranks them third place in the loaded Western Conference, and after watching this team play I’m here to acknowledge that if this team stays healthy along with continuing their style of play it’s hard not to mention this team as back to back champions.

The Los Angeles Lakers ranking in the major statistical categories is quite illustrious, the Lakers are fourth in the NBA at shooting percentage shooting at a clip of forty eight percent which shows this team is sharing the basketball. The Lakers are seventh in NBA when it comes to rebounding the basketball now that’s quite astonishing considering this years lakers squad is considerably smaller with comparison to last years team.

LeBron James, I mean what more can I mention about this pantheon great who seem to redefine the definition of prime. LeBron James at age thirty six is averaging on the season twenty five points per game, eight rebounds per game, seven assists per game,but the most glaring stat that would happen to come about is LeBron James three point percentage.

LeBron James is shooting the three ball at forty one percent (which if the season ended today that would become a new career high for the accomplished LeBron James) but when watching Lebron James the average viewer wouldn’t believe he’s thirty six, which attributes to how much he takes care of his body it’s reported that LeBron James spend over a million dollars on his body and it shows the girth of LeBron James is amazing.

The player I believed benefited the most from the Lakers winning a championship would happen to be Kyle Kuzma, yes Kuzma’s stats aren’t the best but he’s grown so much as a player both on and off the court.Kuzma has learned that he doesn’t have to shoot the basketball every time the ball touches his fingertips as opposed to when Kuzma first entered the league and shot selection was a glaring concern, Kuzma’s on ball defense has improved vastly exceptionally on the pick and roll whether Kuzma is guarding the screener or the ball handler. Off the court Kuzma has matured as well, remember last season Kuzma would dye his hair colors such as blonde now that’s a thing of the past.

Dennis Schroder has been an amazing acquisition for the Los Angeles Lakers; his quick and shifty speed along with his pesky defense have improved the Lakers backcourt tremendously. Dennis Schroder isn’t the floor general that Rajon Rondo is but he’s a much more consistent scorer than Rondo especially from the mid-range where Schroder is shooting at thirty eight percent, another thing I must applaud is Schroder has turned himself into a excellent finisher at the rim which is quite remarkable for a player whose under six foot three and only weighs about one hundred seventy two pounds. Dennis Schroder is capable of running the offense as well as playing off the ball that benefits the Lakers because Schroder’s versatility will lessen the load on Lebron James.

Montrezl Harrell has impressed me with his play whether it’s been his ability to take advantage of his speed on the low block or his capability to knock down a fifteen to twenty foot mid-range jumper with consistency. On the season Montrezl Harrell is averaging thirteen points per game on sixty two percent shooting, that scoring average is indeed going to ascend as Montrezl Harrell becomes more comfortable within the Lakers offense, with Harrell winning the sixth man of the year last season he’s going to be that spark the lakers bench can benefit from because Harrell is able to take emensse pressure of the shoulders of Anthony Davis. Montrezl Harrell is an excellent roller when coming off the pick and roll this helps the Lakers because with a hard drive to the rim that forces the defence to collapse the defense which give the Lakers shooters open looks whether from the three point line or from mid range.

Anthony Davis has begin the season with a slow start as even himself has came out and said publicly, following a win against the Milwaukee Bucks Anthony Davis said this during his post game comments “I think I suck right now” which isn’t the case at all Anthony Davis has to remember to stay aggressive because this is a long season, which brings me to remind basketball fans that Anthony davis is a top five centernaly top ten player in the NBA who is averaging twenty two points per game on the season along with nine rebounds but what I’m most impressed with has been his durability so far Davis has played in 18 of the 22 games this season which is a major positive because in previous season’s Davis’s achilles heel has been his ability to stay and remain healthy.

Why I’m certain Anthony Davis will return back to his regular form is the Lakers next stretch of games are against the Hawks, Nuggets and Pistons and Anthony Davis has advantage against all three of those team, with the Hawks Clint Capela isn’t strong enough to bang with Davis on the low block, for the Nuggets Nikola Jokic doesn’t have the foot speed to contend with Davis on the perimeter, last but not least for the pistons Davis has a noticeable height advantage against Blake Griffin.

Alex Caruso has taken full advance of his time on the floor showing he’s much more than a hustle player, Caruso in limited minutes has shown the ability to run a team as well as knock down the three ball what excites me the most about watching Caruso is his comment to playing defense, another Laker who many basketball fans don’t know about is Talen Horton-Tucker, Horton-Tucker is a scoring machine who if just happen to become apart of another team would easily be a six man type or role similar to Lou Williams.

Frank Vogel has done an excellent job coaching this basketball especially when you notice what’s been going on this season the NBA has grappled with how to navigate a season during a global pandemic and without a bubble in place there has been multiple players who have contracted the virus.Frank Vogel has become better equipped at calling play’s out of a timeout along with his in game matchup changes has benefited Lakers for instance when he has Dennis Schroder bringing up the ball and having Lebron James coming off the ball, this has been very interesting because there aren’t many teams who have an off-ball defender who can contain LeBron James.

Marc Gasol and Westley Matthews have been amazing pick-ups for the Lakers as well Marc Gasol is an extremely smart defensive player who can occasionally knock down a three pointer, another thing Gasol is an amazing rebounder which gives the lakers great depth and size.Wesley Mattews is a player I’ve been following since his days in Portland,Matthews gives the lakers an extra defender who is offer placed on the opposing team’s best player also Matthews is a underrated three point shooter seeing that he has shot over thirty five percent from three these last two seasons.

The Los Angeles Lakers are my favorite to win the NBA champion primarily because the Lakers have the best dynamic duo in the NBA, LeBron James and Anthony Davis are both top five players in the NBA and why I believe their coming out the west are the Los Angeles Clippers don’t have a primary ball handler and we saw that Kawhi Leonard isn’t comfortable bring the ball up the floor, then to add insult to injury Paul George has shown an inability to raise his play in the playoffs. With the Denver Nuggets Jammal Murray is excessively nonconsent, why I believe the east won’t win the championship are the Milwaukee Bucks best player Giannis Antetokounmpo can be stopped and has been stopped, with the philadelphia 76ers Ben Simmions stops this team as a matter of fact Simmons stops himself by not shooting the basketball.With the Boston Celtics their still young and the Celtics don’t a presence in the paint now if a trade for Andre Drummond or JaVale Magee happens it’s a different story, Last but not least the Brooklyn Nets, I personally believe that Kyrie is going to hold this team whether its his media antics or just alienating teammates.