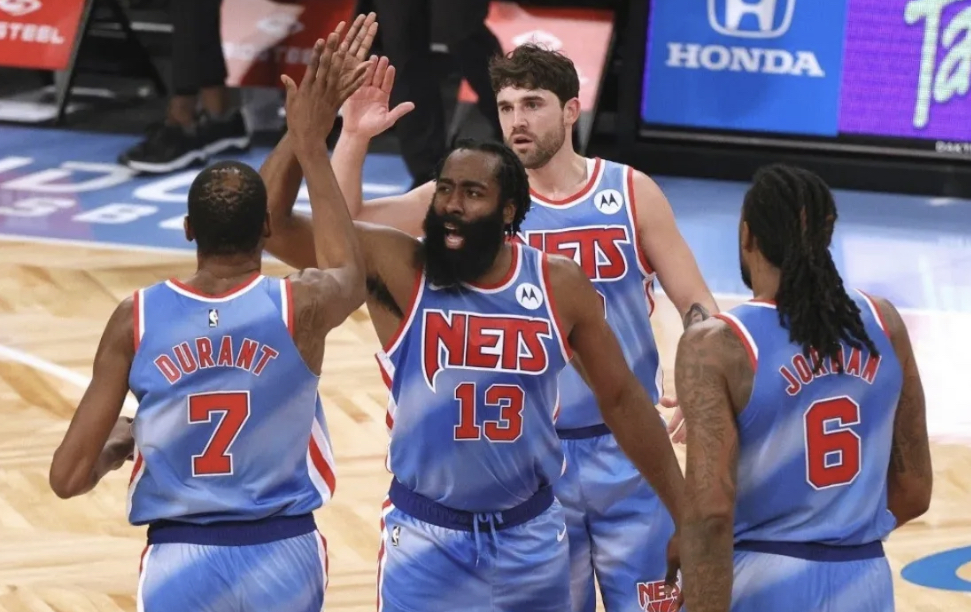 After much anticipation, last Thursday, James Harden was traded from the Houston Rockets to the Brooklyn Nets in a four team deal that sent an extensive haul of draft picks and first-round-swaps to the Rockets, along with Caris LaVert and Jarrett Allen, who both got shipped out to the Pacers and Cavaliers respectively. This came after a beginning of the season where James Harden’s effort was low, was seen breaking COVID protocols by being at a strip club without a mask, and appeared to be overweight and out of shape.

Harden joins Kevin Durant and Kyrie Irving to form the most offensively explosive big three of all time. Before ever playing a game together, the trio is already averaging 83.0 points per game this season, and that is using Harden’s average of 24.8 points for the season which is low for him considering for the past three seasons he has averaged over 30. 83 points is far and away the most points ever averaged by a trio, with second place being the 1983-1984 Denver Nuggets with Kiki Vandeweghe, Dan Issel and Alex English. That team was eventually knocked out in the first round of the playoffs as although they had the highest amount of points per game in the league that season, but that was coupled with their defensive points per game being the lowest in the league.

That’s what is scary for other Eastern Conference contenders. Their offense will inevitably be great, as the three stars, partnered with the excellent shooting of Joe Harris, will be extremely strong, and if their defense can remain middle of the pack, it will be incredibly tough for teams to match that scoring output.

What is worrisome for the Nets, is that they had to trade away one of the league’s best young rim protectors in Jarrett Allen, who has appeared in the top 20 of most defensive box score stats and advanced numbers. This Nets roster will need to see guys like Deandre Jordan, Jeff Green, Nicolas Claxton and Timothé Luwawu-Cabarrot to step up on the defensive side of the ball to fill this hole.

On Saturday night, James Harden made his debut for Brooklyn Nets as they took on the Orlando Magic. The Nets coaching staff decided not to try to ease the 2018 MVP into the rotation but gave him 40 minutes in his first action.

Although there was an NFL playoff game on at the time of tipoff, the ratings nearly doubled what the average Nets game would bring in. Harden’s play on the court was very encouraging as he was able to tally a 32 point, 12 rebound and 14 assist triple double in his debut. It was clear that they were just improvising on the court as they have had practically no time to practice together as a team and work on sets. But Improvising becomes a lot easier when there are two MVPs on the court at the same time who used to be teammates in Oklahoma City.

When Harden was in Houston, one of the problems was that offen​when he wasn’t isolating or running a pick and roll, he would stand 40 feet from the basket and prove to be no threat to defenses which would allow them to have a numbers advantage. This was one of the main reasons why Chris Paul seemed displeased in Houston, as his play revolved around penetrating, and everyone in the offense being engaged and ready to score at any time.

In Harden’s last ever game in Houston against the Lakers, he was giving the type of effort you would see in the last game of a pickup session where everyone is out of shape, dead tired and doing the bare minimum, just wishing the game would end. But this wasn’t a pickup session, this was an NBA game against the defending champions. But in his game against Orlando, Harden seemed fully present and was exerting effort on both sides of the court. He was making sure all members of the offense got touches, would space the floor and be ready for kickouts.

On defense, he has always been a sneaky good defender (when he tried) because of how good of hands he has in terms of stripping players and deflecting passes. This was on full display as he got four steals, a block, and many other defelections that would halt an Orlando offensive possession.

Against the Eastern Conference leading Milwaukee Bucks, the Nets put the NBA world on notice by winning 125-123. The dominant duo of Durant and Harden combined for 64 points (34 for Harden, 30 for Durant) and proved to be too much in the clutch for the reigning MVP Giannis Antetokoumpo. Harden’s ability to penetrate and Durant’s capability to elevate and shoot his jumper at anytime is a nightmare to guard in the 4th quarter. The shot that ended up winning them the game came off of Harden rebounding one of his own misses and then finding Durant open who calmly drilled a three that ripped out the heart of Bucks fans.

Harden seems fully present on the court and seems to be striving to exert more consistent effort. It also seems as if the famous video of Harden that went viral in the past few weeks where he looked…. A bit heavier than he normally does, was either edited, or Harden was wearing 15 layers underneath his warmup. Harden seems to be in good shape and will continue to play himself further into shape as the season goes on.

So far in a limited sample size, it seems as if Harden will fit in just fine in Brooklyn, but we will have to wait and see what happens when Kyrie Irving returns to the court. If the on-court product stays the same as what we’ve seen in the first two games, the Nets are in good shape to make a run deep into the Eastern Conference. But If the offense goes to another level, not only will the Eastern Conference need to be fearful, but the defending champions in the west as well.