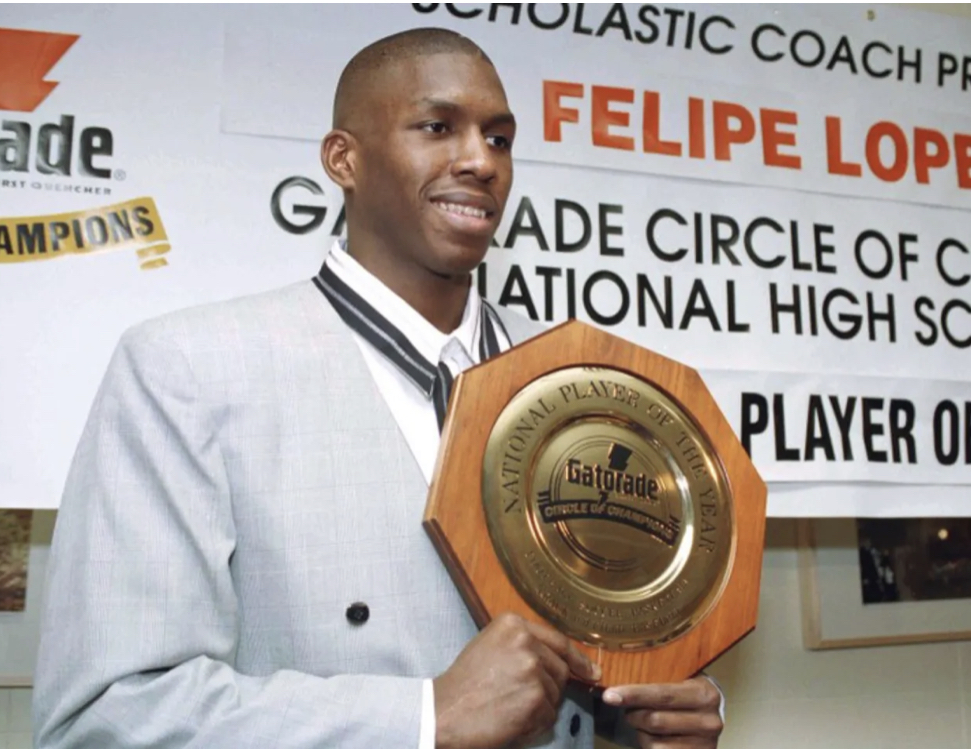 Here is my top 10 players from the 1990’s along with a large honorable mention in which soo many players who deserved to be in the top ten. Here is my list:

1. Felipe Lopez – Rice HS, St Johns, & NBA: Felipe Lopez dominated the ferocious competition he went up against in high school. The Dominican community and hoop fans as well as the celebrities pack up the gyms to watch Felipe play. In 1994, he led Rice  to the CHSAA City Championship and NY State Federation title as well. He was name MVP in the McDonalds All American game and National HS Player of the Year. Took his talents to St Johns and had an excellent four year career by leading the Red Storm to the 1998 NCAA Tournament. Then play with Vancouver, Washington, and Minnesota in the NBA for a few seasons in which his injuries took a toll on him.

2. Stephon Marbury – Lincoln, Georgia Tech, & NBA: Marbury followed the path of his brothers and became the best. Marbury became one of the best PG to ever play in New York City. In 1995, he led Lincoln to the PSAL City Championship and New York State Federation title as well. Then became the top freshman in the country at Georgia Tech and was a one and done. He was drafted fifth overall in the 1996 NBA Draft by the Milwaukee Bucks and was traded to Minnesota on draft day. He had sensational rookie campaign. He became a three time NBA All Star and was part of the 2004 USA Olympic Team. He also played with the Nets, Suns, Knicks, and Celtics.

3. Jamal Mashburn – Cardinal Hayes, Kentucky, & NBA: Mashburn had a great HS senior campaign. He led Hayes to the 1990 CHSAA City Championship. Then played at Kentucky and led the Wildcats to the final four in 1993. Then had a excellent career with the Dallas Mavericks and was an All Star.

4. Ron Artest – LaSalle, St John’s, & NBA: Artest was McDonalds All American in HS and one of the best player in 1997. He led his High School to the CHSAA City Championship that year. Then played at St John’s for two seasons and led the Red Storm to the 1999 Elite Eight in the NCAA Tournament. Played several seasons in the NBA and a former All Star and All Defensive player. Played with the Bulls, Pacers, Lakers, and Knicks. Later changed his name in which he is Metta World Peace.

5. Shammgod Wells – LaSalle, Providence & NBA: Shammgod was All American and one of the best point guards to come out of New York City. Went to Providence and carried the Friars to the elite eight in the 1997 NCAA Tournament. He changed his name to God Shammgod and played in the NBA with the Washington Wizzards for eight seasons.

6. Lamar Odom – Christ The King, Redemption Academy, Rhode Island, & NBA: Lamar Odom was of the best player to come out of the NYC. He was part of a great Christ the King team that had Erick Barkley, and Craig “Speedy” Claxton. Played at Rhode Island for one season. Then he played in the NBA with the Clippers, Heat, Lakers, and Mavericks. He became a key role player and had a good career. He was a part of the 2004 USA Olympic Basketball Team.

7. Rafer Alston – Cardoza, Ventura JC, Fresno St, & NBA: Known as “Skip To My Lou” Alston was one the best point guards to come out of New York City. He had some great ball handling skills and quick on the court. He was a standout at Cardoza, then went to Ventura JC in California, then transfer to Fresno St in which he became the focal point of Jerry Tarkanian’s squad. Then went in the 1998 NBA draft and was selected in the second round by the Milwaukee Bucks. He didn’t make the cut and played in the CBA and in 1999 he was part of the And 1 Mixtape tour for a few seasons and became a legend. Then played in the NBA as a role player for the Orlando Magic when they went to the 2009 NBA Finals. He had a good NBA career playing with the Bucks, Raptors, Heat, and Rockets.

8. Kareem Reid – St. Raymond’s, & Arkansas: Kareem Reid played in the same class with Felipe Lopez. He was McDonalds All American and one of the top players in the city. He became a four year letterman at Arkansas. He became a New York Streetball Legend known as “The Best Kept Secret”

9. Kenny Satterfield – Rice, Cincinnati, & NBA: Another great PG to come out of New York City. Satterfield led Rice to the 1999 CHSAA City Championship. He was All American and New York City player of the year. Then he move on to play at Cincinnati and became one of the elite players in college basketball. Then he enter the 2001 NBA Draft and was selection in the second round by the Denver Nuggets in which he played a couple of seasons. Then had a long career playing overseas.

10. Terrence Rencher – St. Raymond’s, Texas, & NBA: Rencher was Mr. Basketball in the State of New York in 1991. He also led St. Ray’s to the CHSAA City Championship. Then played at Texas in which he became a four year letterman and scoring over 1000 points. Then played in the NBA for three seasons with the Heat and Suns.

We will like to hear from you and tell us who you believe that should have been on this list.