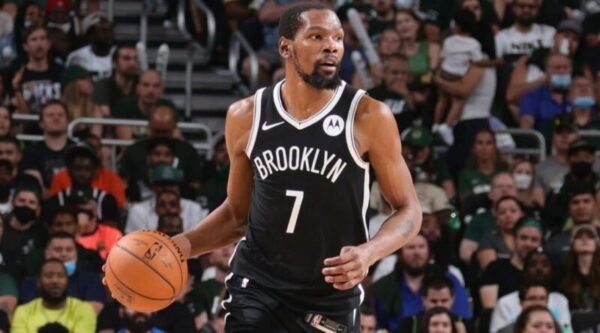 Athletic’s NBA insider Shams Charania broke the news that Durant, Nets head coach Steven Nash, the team’s general Sean Marks, and own Joe Tsai recently met and have seemingly put all the issues between them to the side, and will pursue an NBA championship together in the 2022-2023 season.

It was report by various sources that Durant had doubled down on his trade request from July, and gave Tsai an ultimatum of it was either him, Steve Nash, or the general manager. All indications after the meeting were that Tsai sided with his coach and the team executive. Despite many organizations going in on what it would take to get a deal done, none reportedly ever came anywhere on getting a deal done for Durant.

Over the last month, there have been constant rumors that the organization was trying to make a trade both Durant and Kyrie Irving would not return to Brooklyn. On Monday, Charania also reported that the Nets had closed up shop on the Irving trade market and he would be back next season.

Marks released a statement following the news stating, “Steve Nash and I, together with Joe Tsai and Clara Wu Tsai, met with Kevin Durant and Rich Kleiman in Los Angeles yesterday. We have agreed to move forward with our partnership. We are focusing on basketball, with one collective goal in mind: build a lasting franchise to bring a championship to Brooklyn.”

With Durant back and with him staying healthy along with Irving the Nets can be contenders for the NBA Championship. Also, Ben Simmons can get healthy he can make an impact on this roster. It will be an interesting two months into the NBA season to see where the Nets will stand.