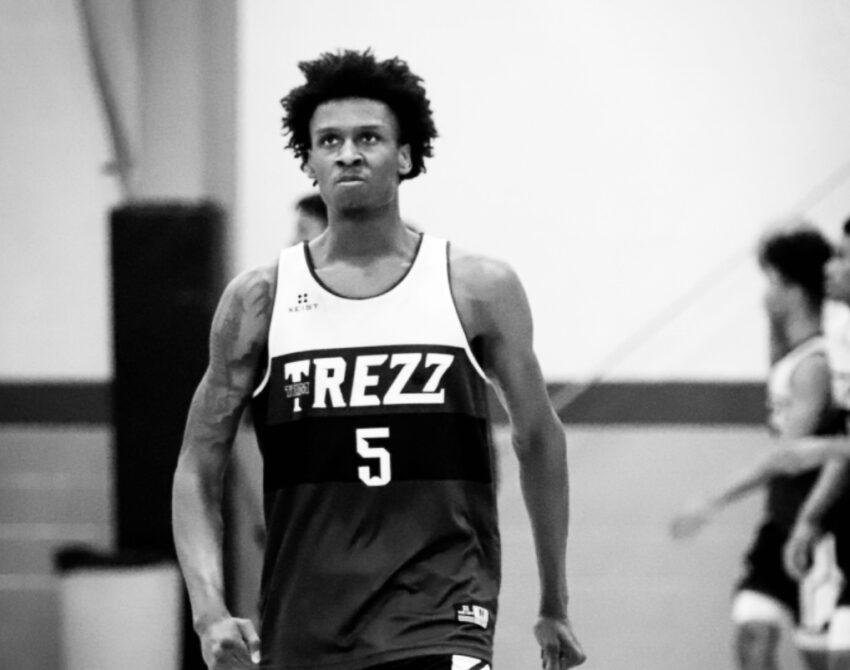 A lot of talent around the circuit and Anthony Forrester gives you a look into some of the top performers for May 19th.

1) Treyvon Byrd (6’7”, 180) – 2022 – Forward – Bull City Prep Academy – Durham, NC – Team Trezz: Treyvon Byrd is a player and isn’t scared of any big moments. When his team needs a bucket they can count on him. Treyvon length and scoring ability will continue to translate for him as he continues to develop. Treyvon is a threat from deep but really does his damge at the rim when attacking. He is a mismatch nightmare for defenders.

2) Stephon Castle (6’6”, 205) – 2023 – Guard – Newton – Covington, GA – Atlanta Xpress: Stephon Castle utilizes his size well when getting to the rim. Looking at Stephon frame overall he has the physique and he uses that to his advantage over smaller guards. Stephon is a guard that can get a bucket when his team needs one and can playmake and get everyone involved as well.

3) Somto Cyril (6’11”, 240) – 2024 – Center – Hamilton Heights Christian Academy – Chattanooga, TN – EAB Tennessee: Somto Cyril is a force down low that is hard for many to match. Somto makes it tough for anyone to try to score on him he is a shot blocking machine. Somto is an insane athlete and as the years go on he will only get better.

4) Mari Jordan (6’5”, 185) – 2023 – Forward – Dacula – Dacula,GA – Georgia Stars: Mari is a aggressive forward that plays with a good flow to his game. Mari is an offense weapon that can put up points in a hurry in a variety of ways. Mari ability to shoot from deep opens up his drives at the rim and Mari isn’t scared of contact. As Mari team the Georgia Stars won the Orange bracket at the Bob Gibbons Tournament of Champions.

5) Brandon Rechsteiner (6’1”) – 2023 – Guard – Etowah High School – Woodstock, GA – Atlanta All Stars: Brandon Rechsteiner is the ultimate floor general and is one of the top guards in Georiga. His ability to score from the three point at a high clip really elevates his game. Brandon lob throwing ability to his teammates is spot on. Brandon has very little flaws in his game and continues to get better as the weeks go on.

7) Bryce Blaine (6’5”) – 2022 – Guard – Berkmar – Chesterfield, VA- Team Huncho: Bryce is a tremendous two-way player his ability to impact the games on both sides at a high level is very impressive. Bryce can guard multiple positions causing steals and deflections with his size and strength. On the offensive end he can create for his teammates but his true positive on the offensive end is his ability to score on his own. Bryce is a flat out scorer his ability to hit contested shots and catch and shoot.

8) John Broom (6’5”, 170) – 2023 – Guard – Jacksonville – Jacksonville, AL – Alabama Fusion: John Broom is a crafty guard that has smooth handles. John has good playmaking ability to really create for others. John makes it a long night when he is hot teams cannot cool him off.

9) Teagan Moore (6’5”, 210) – 2023 – Guard – Owen County – Owen County, KY – Griffin Elite: Teagan Moore is one of the most consistent players week by week. Teagan frame at his postion and size is intriging. Teagan has shown that when he competes he is a mismatch for guards becasue of his size and ability to bully down in the post. Teagan can score from all three levels and has a smooth touch.

10) Eddie Ricks (6’5”, 175) – 2023 – Guard – Clarksville Academy – Clarksville, TN – EAB Tennessee: Eddie Ricks has displayed a lot as of recently. Eddie has shown to be one of the most intresting forwards as of late. Eddie is a clutch player and showed it rcently being able to make game winners is very impressive. Eddie that is a player that can get his offense off the ball as he cuts to the rim plenty of times.

11) Derin Saran (6’3”) – 2023 – Guard – Asheville School – Asheville, NC – 1 of 1 Elite: Derin Saran is a good floor general with a high basketball IQ and a nice handle. Derin is quick and crafty when attacking the rim. Derin couldn’t show off too much of his outside shooting with his wrist but he sure showed everything else in his game that really catches the eyes of spectators.

12) Keyon Webb (6’2”, 190) – 2022 – Guard – Riverside – Durham, NC – Team Trezz: Keyon Webb is a clutch player making crucial shot after shot at The Bob Gibbons. Keyon shoots from three at a high clip. That helps open up his game when he attacks off the bounce. Keyon can score on all three levels when you add in his mid range game that is elite especially his ability to hit contested ones. Keyon creates for others really puts his guys in position.

13) J.T. Rock (7’0”, 225) – 2024 – Center – Lincoln – Sioux, SD – South Dakota Attack: J.T. Rock is a stretch big that can plan on the inside and protect the paint. J.T. can handle the rock a little and plays strong downlow. J.T. cleans up everything around the rim. His ability to shoot the ball well and stretch the floor helps his game in so many ways. J.T. is a menace on the glass.

14) Solomon Ball (6’3”,185) – Combo Guard – St. James School , Sharpsburg, MD – Team Melo: Solomon Ball is a guard that plays with toughness and is relentless on both sides of the ball. Ball is an athletic guard that can use that to his ability when getting to the rim. His defense is key is the ability to challenge his man every possession.

15) Tafara Gapare (6’10”, 185) – Forward – South Kent School – Team Melo: Tafara Gapare has a good frame mixed in with his athleticism makes him an intriguing prospect. Tafara is a good shot blocker and he displayed it challenging shot after shot. Tafara’s ability to dribble the ball at his size with those handles is an encouraging sign.

16) Tahaad Pettiford (5’11”, 160) – Guard – Hudson Catholic – Jersey City, NJ – NY Lightning: Tahaad Pettiford is an efficient scorer that shots the ball very well. Tahaad shows his ability to create his own shot using his handles. Tahaad is going to work on both ends as he is a very smart defender. Tahaad is a playmaker and keeps his teammates involved.

17) Matas Buzelis (6’9”, 175) – Forward – Brewster Academy – Wolfeboro, NH – Expressions: Matas Buzelis has been impressive with versatility. Matas can stretch the floor with his ability to knock down shots. Matas has solid handles for his size but that will continue to develop. Matas frame is good, he will just need to fill it out a little.

18) George Turkson (6’6”, 180) – 2024 – Forward – Bradford Christian Academy – Haverhill, MA – Mass Rivals: George Turkson is a guard/forward that plays with a very high motor. He gets out and runs the floor well. The defensive versatility he showed and rebounding is impressive.

19) Zayden High (6’9”, 225) – 2023 – Forward – Compass Prep – Chandler, AZ – Smithson Valley: Zayden High has a very good skill set at his size. Zayden protects the rim at a high level deflecting a lot of shots. Zayden is a very good rebounder and active at the rim. His ability to defend multiple positions makes him versatile on defense. On the offensive end, Zayden can finish at the rim and stretch the floor by knocking down perimeter shots.

20) B.J. Davis (6’1”, 170) – 2023 – Guard – Modesto Christian – Modesto, CA – Jalen Green Elite: B.J. Davis is a very quick guard that is shifty. B.J. plays with great pace which opens up so much of his offensive game. B.J. is a creative finisher when attacking the rim. B.J. speed helps him with his shot-creating ability. B.J. is a nightmare for the defense as the guard can score on all three levels.

21)Carey Booth Jr. (6’9”, 190) – 2023 – Forward – Cherry Creek – Englewood, CO – KC Run GMC: Carey Booth Jr. has great length and athletic ability and has really stood out as of late. Carey has the ability to catch lobs and finish strong at the rim as well as the capability of stepping out and shooting perimeter shots. Carey has good length that helps him on the defensive end when it comes to contesting shots.

22) Andrej Stojakovic (6’6”, 185) – 2023 – Forward – Jesuit – Carmichael, CA – Compton Magic: Andrej Stojakovic plays the game at his own pace. He has a really good feel for the game and can create his own offense. Andrej can score on all three levels and shown his skill set. He is a real crafty player and its going to be exciting to see him continue to develop.

23) Jaylin Stewart (6’5”, 180) – 2023 – Forward – Garfield – Garfield, WA – Seattle Rotary: Jaylin Stewart is a versatile forward that can score on all levels. Jaylin has a big frame and he utilizes that to his advantage when playmaking for himself and others. Jaylin has really shown he belongs with the top prospects in his class.

24) Jamie Kasier Jr. (6’6”, 200) – 2023 – Guard – Bishop Ireton – Burke, VA – New World: Jamie Kasier Jr. is a two-way guard with a very solid size for his position. Jamie is able to finish through contact when going at the rim. Jamie is a strong guard that plays with a high motor. Jamie’s ability to hit the consistent outside jumper makes him a threat from deep. Jamie is a very good transition guard.

25)Arrinten Page (6’8”, 220) – 2023 – Forward – Wheeler – Marietta, GA – The Skills Factory: Arrinten Page is a long forward that is a presence defensively with aloth of athleticism. His ability to be a lob catcher and to consistently finish inside through contact is good for him. Arrinten has shown his ability to have a little bit of a offensive game. Especially in the pick and roll.

Xavier Booker (6’10”) – 2023 – Center – Cathedral – Indianapolis, IN – Team George Hill: Xavier Booker the 6’10” center has tremendous versatility. Xavier frame makes him such a unique talent with his long wingspan. Xavier can expand his game to perimeter to hit shots which spaces out the floor for his team.

Garwey Dual (6’5”, 175) – 2023 – Guard – Carmel – Carmel, In – George Hill All Indy: Garwey Dual is a very long and athletic guard that is a threat off the bounce for any defender. Garwey has a decent jumper but with his other tools in his game he has good amount of upside. Garwey has really impressed on the defensive end with his toughness on that end. Garwey is a very underrated playmaker and creates for his teammates.