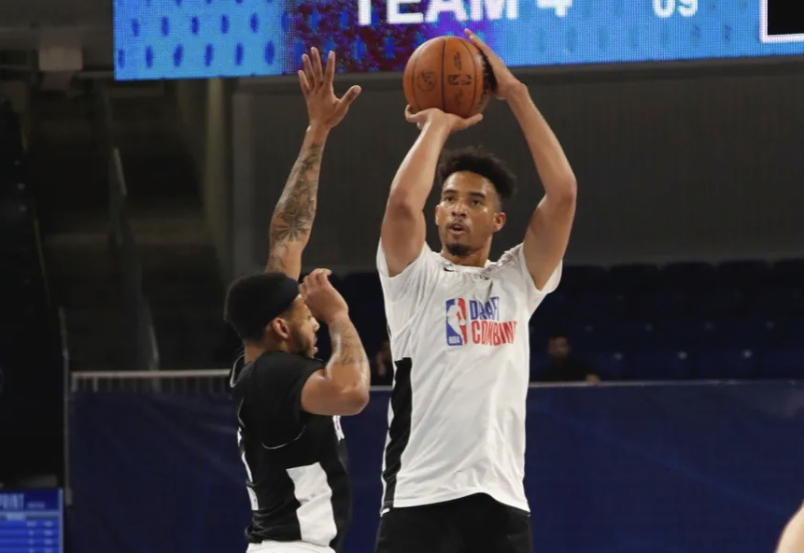 During the 2021 NBA draft combine we saw this year’s prospects display their skills and a glimpse of what NBA Execs believe these players can bring to their organization. As the combine went on we saw different players stand out from strength and ability, Scrimmages and Pro days. With that Anthony Forrester talks about 20 prospects that stood out during this year’s NBA Draft Combine.

Quentin Grimes, University of Houston – Quentin Grimes had an impressive showing at the combine as the athletic guard really took over in the second scrimmage where he hit seven 3-pointers and had a total of 27 points. This was Quentin’s second year at the combine and he came in like an experienced player. Quentin showed his playmaking ability in the scrimmage while shooting the ball really well. The 6-foot-5 guard is projected as a first round pick.

Trey Murphy, University of Virginia – Trey Murphy has been catching a lot of steam before the draft with his 6-foot-9 frame. The lanky wing really impressed people in his pro day rehearsal workout. The wing out of Virginia shot 43% from 3 and really showed his shooting stroke.

Joe Wieskamp, University of Iowa – Joe Wieskamp really came into the combine with good measurements with his 42” vertical and only 4% body fat. Joe showed his elite level shooting which is perfect for today’s NBA. The 6’7 wing is athletic and finds ways to make plays for others. Joe should be getting more buzz than he is now but he is a first round pick type talent.

Jonathan Kuminga, G-League Ignite – Jonathan Kuminga is one of the most intriguing prospects in the draft. He has potential to have one of the highest ceilings in this draft. Jonathan had a full house for his pro day at the Combine where the 6-foot-8 wing displayed his athleticism and skill. Jonathan shot the ball really well at the combine and that was great for him as his ability to hit the 3-pointer at a high clip was a question mark for him going into the combine. He impressed the Execs in attendance during his pro day. Jonathan Kuminga is a projected top-5 pick in this year’s draft.

James Bouknight, University of Connecticut – James Bouknight is a player that has been gaining some steam heading into the draft. During his Pro day at the combine he really shot the ball extremely well showing his footwork and his ability to shoot off the ball. At UConn he played on the ball so coming into the league NBA teams want to know if he can play off the ball and be a combo guard at the next level. He proved that in his pro day and should really be considered for a top 10 pick. He is that good.

Scottie Barnes, Florida State University – Scottie Barnes has been skying up different teams’ draft boards after his performance at the combine. He blew execs away with his measurements from the combine with his 7-3 wingspan and his 39 ½ inch max vertical. His 2.99-second shuttle was the second best at the combine. He showed his skill set during his pro day with athleticism and his ability to handle the basketball. Scottie showed leadership skills during the combine scrimmages with his energy on the sidelines supporting players even though he was not playing in the scrimmages.

Isaiah Mobley, University of Southern California – Isaiah Mobley the 6-foot-10, 235 pound forward was very impressive in the second scrimmage at the NBA draft combine where he scored 18 points, four rebounds, and five steals. Isaiah showed throughout the combine that he can play and is a very underrated prospect during this draft process. Some might not have been looking at Isaiah because they see the potential his brother Evan Mobley has but he put execs on notice after his performance and is making a name for himself.

Sharife Cooper, University of Auburn – Sharife Cooper brought energy to his pro day at the combine which really took execs in attendance by storm. Sharife showed his quickness as well as ball handling ability during his workout. Sharife is known for his scoring ability and shot the ball very well during his workout. Sharife measured in at 6’4” at the combine which is really impressive for the guard because at the end of his season at Auburn he was 6’0”. Sharife is a projected first round pick and could be a lottery pick.

Nah’Shon “Bones” Hyland, VCU – Bones Hyland stood out in day one of the combine scrimmages with 17 points, five rebounds and four assists. Not only did he stand out in the scrimmage but in his agility drill he led all guards with the fastest time at 10.53 seconds. Hyland was very impressive at the combine and showed signs of being an all around playmaker at the next level.

Justin Champagnie, University of Pitt – Justin Champagnie stepped up at the NBA Draft Combine scrimmage leading his team to a victory with 11 points, two assists, and a game-high 12 rebounds and one steal. Justin’s shooting mechanics look well during his pro day which was a good sign for him as the former panther shot 31.1% last season. Justin showed aggressiveness during the combine and really was a workhorse during the scrimmages.

Josh Christopher, Arizona State – Josh Christopher controlled the game during his scrimmage at the combine scoring 16 points and grabbing 8 rebounds. The guard from Arizona State bet on himself by playing in the 5-on-5 which a lot of other prospects elected not to. Josh brings offensive firepower to a team and he displayed that at the combine with his ability to create his own shot and score at a high level. Josh showed his explosiveness at the combine with his play style looking like it will translate good for the NBA game. Josh has potential to be a lottery pick.

Tre Mann, University of Florida – Tre Mann the 6-foot-4 guard had to reschedule his pro day because he was ill. During his rescheduled pro day at the combine he displayed his smooth handles and extreme bounce. Tre was known in college for his deep range and that was displayed during his pro day.

Neemias Queta, Utah State – Neemias Queta was very impressive in the second scrimmage at the NBA combine where he scored 15 points. Neemias shot the ball really well while playing great defensively during the scrimmages. Neemias made some great passes and really showed a little bit of playmaking ability. Neemias’ measurements were impressive as well with his 7’0” frame and 7’4” wingspan.

Jericho Sims, University of Texas – The 6-foot-10 big recorded a 44.5 inch max vertical at the combine which was insane. During the combine Jericho was a beast dunking everything in sight. Jericho showed his explosiveness during the combine which had execs excited about what he can bring to the NBA game. Jericho displayed his offensive and defensive ability dealing with the pick and roll. From defending the pick and roll at a high level as well as finishing out of ball screens. Jericho also showed flashes of his handles and touch which was impressive at his size.

Jason Preston, University of Ohio – During the scrimmages at the combine Jason played at a very high level dishing out assists all over the court. Really displayed his vision and feel for the game during the scrimmages. Jason shot the ball at an extremely high clip. Jason length helps him on the defensive end as he played really good defense during the combine. I wouldn’t be surprised if Jason ends up being one of the best guards in this class; he is just that special.

Duane Washington, Ohio State – Duane had a good outing at the NBA Combine during the scrimmages. During the first scrimmage Duane had 17 points, 2 assists, and 2 rebounds. Duane showed his aggressiveness as he had a dunk on a fast break with Isaiah Todd trailing and he threw it down with authority. Duane scored both inside and out but at an efficient rate. Duane has shown leadership skills being very vocal on the court.

Aaron Wiggins, University of Maryland – During the scrimmage at the combine Aaron Wiggins had a solid outing with 14 points and 2 steals. He really helped his stock with his play. Aaron showed flashes of what he brings to the table. His measurables at the combine were very good. Wiggins had the fastest shuttle at 3.00 seconds out of all guards. Aaron is the third tallest guard at 6’45”.

JT Thor, Auburn – JT is one of the youngest players in the draft. The former Auburn War eagle had his athleticism on display with the size he possesses. JT has a nice stroke and shot the ball as well as any other frontcourt player at the Combine. JT measured in at 6’8” barefoot with a 7’3” wingspan. JT is very intriguing on the defensive side of the ball with his size. JT is a big question mark in this draft because his ceiling is very high and he has potential to be one of the best prospects out of this draft.