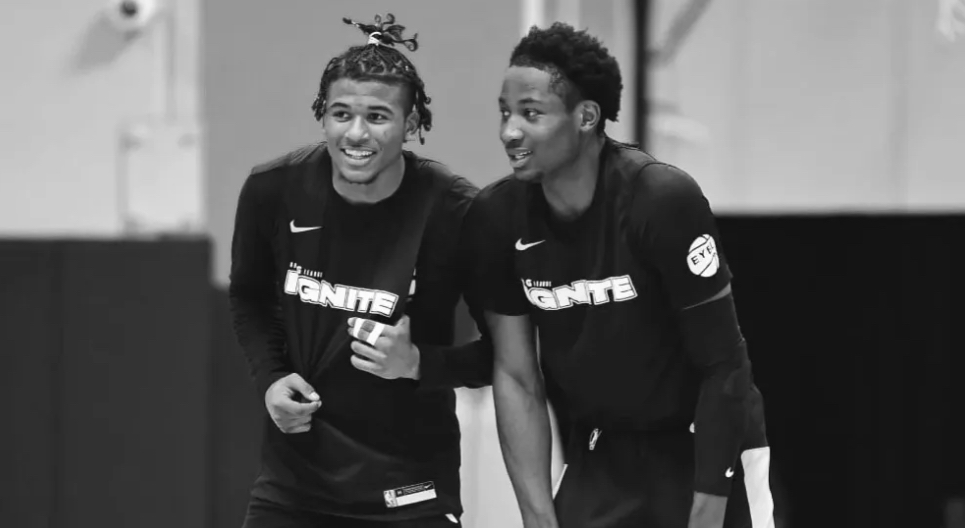 Jonathan Kuminga looks poised in his first 3 G League games averaging 22 points, 7 rebounds, 3 assists, 1 steal, and 1 block. The 18-year-old has lived up to the hype and has been the leader for the Ignite so far. His ability to beat defenders off the dribble and get to the rim while showing his shooting ability has shown why scouts believe Jonathan is a future Top 5 pick in this upcoming draft.

After a slow start in his debut with 11 points, Jalen has come off strong with back to back 20+ point performances. Jalen has shown flashes during the first 3 games why he is a projected top 5 pick in this upcoming draft with his teammate Jonathan Kuminga. Jalen is averaging 17.7 points while shooting 55.9% from the field and 40.0% from three. Jalen will need to make some adjustments throughout the season as the top prospect will continue to try to improve from game to game.

Daishen Nix impacts the game not just with his scoring but his ability to be a playmaker. Daishen is very active on both sides of the floor with his ability to shoot the ball at an efficient clip while being a dog on the defensive end shows his leadership on the floor. On his birthday February 13th Daishen had his coming out party offensively exploding for 25 points off the bench.

The NBA veteran has been everything the Ignite needed this season. Jarrett gives the Ignite experience at the point guard position as well as a mentor for the young men straight out of high school. Jarrett is doing a little bit of everything for the Ignite he is helping with the offensive load while getting his teammates involved. Jarrett is averaging 14.7 points and a team-high 6 assist per game. Expect Jarrett to be the glue guy for this young Ignite squad.

After a disappointing debut, the stretch big has started to look more comfortable on the floor. Isaiah’s playstyle gives the Ignite versatility on the floor especially when Isaiah is shooting 4 of 5 from 3 in his last outing against the Raptors 905. The last two games are glimpses of the potential scouts see in Isaiah hopefully he can continue to build on that as the season continues.

Donta ability to affect the game on the defensive end the way he has so far has really been a benefit to the Ignite. Donta has been a defensive anchor so far averaging 1 steal and 2 blocks per game while averaging 6 defensive rebounds and 8.7 total rebounds per game.

Brandon plays in the frontcourt with Donta Hall as both the big men round off the lineup with Jalen, Jonathan, and Jarrett. Brandon started off strong with nearly a double-double in his first game with 17 points and 9 rebounds. Since then Brandon has seen his minutes decrease in the last two games while getting four fouls each game. Brandon gives the Ignite a physical presence down low so will see how Coach Shaw balances out his lineup as Isaiah Todd continues to improve.

Bobby has only played one game this season but in that game, the veteran guard started alongside Jalen and Jonathan. Bobby like Jarrett brings that NBA experience and that mentorship role on this Ignite team. Bobby averaged 8 points and 3 assist in his lone start with the Ignite. As the season continues look for Bobby to bring that deep threat at the point guard spot with his ability to shoot the ball from three at an efficient clip of 66.7% from three.

Cody gives the Ignite solid minutes off the bench at the guard position. At times he turns the ball over too much but his hustle and ability to know his role and do his part is key for him on this Ignite roster.

The former NBA player Amir started off strong in game one showing his experience with 8 points and 8 rebounds in the Ignites debut against Santa Cruz Warriors. Since the Ignite debut, Isiah Todd has improved his level of play and we have seen Amir Johnson’s minutes and production decrease. As the season continues let’s look to see if Amir can try and make a consistent impact with the Ignite.

Jessie has appeared in one game for the Ignite and shot 100% from the field as he went 3 for 3 from the field and 2 for 2 from three-point range in 8 minutes played. It’s a small sample size but look for Jessie to take advantage of his minutes every time he is giving an opportunity.

Reggie the 6’5” forward has appeared in 2 games so far where he has only totaled 2 points in those games. Reggie isn’t shooting the ball well in the first two outings but there is a lot more basketball to be played. As the season continues let’s see what role Reggie will play coming off the bench for this young Ignite team.