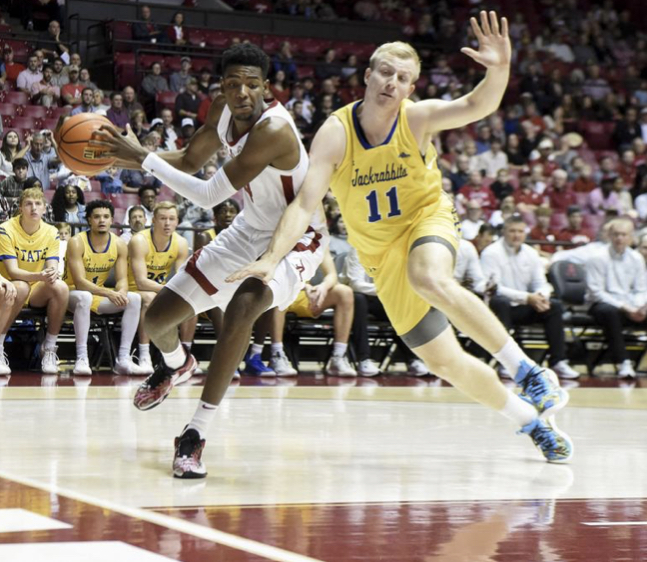 Alabama forward Brandon Miller looks to continue his dominant freshman season as he looks to become a top lottery pick in the NBA’s 2023 Draft.

Miller is a 6’9” freshman from Antioch, Tennessee. He was ranked as the No. 9 recruit in the class of 2022’s ESPN’s top 100. Miller played at Cane Ridge High School.

Miller committed to the University of Alabama and has immediately made an impact on the court this season. Coming out of high school, Miller had offers from schools such as DePaul, Kentucky, Louisville, and even Alabama’s rival Auburn. Ultimately choosing the Crimson Tide as his preferred destination.

This season Miller has quickly become the team’s leading scorer as well as the leading rebounder. He also leads the team in minutes played as he averages around 33.9 minutes per game.

In eight games this season for Alabama, Miller is averaging 19.6 points a game, which he currently is ranked as the 35th best in the nation. While shooting 40 percent from the field and 48 percent from the three-point line. He is also averaging 8.9 rebounds and 2.0 assists a game thus far this season.

With Miller stepping into the starting role for the Crimson Tide, he has led Alabama to major wins this season. With the most notable win coming on November 27 against No. 1 UNC as

Alabama outlasted the Tar Heels in four overtime periods to a 103 to 101 win.

Even though the Crimson Tide beat the number one team in the country at the time, Miller found himself struggling from the field as he only scored 14 points out of 4-21 from the field averaging 19 percent for the game shooting the ball. He also found himself struggling from shooting from the deep, as half of his shots were from behind the 3-point line with an overall statistic of making only 2-8. Alabama’s forward found himself in foul trouble during the game as he was playing with four personal fouls.

Miller’s competitive performance has led Alabama to the No. 11 spot in the country. Alabama is currently coming off a win against South Dakota State, 78-65 as of December 3rd. Miller had a good performance as he shot 5-11 from the field scoring a total of 16 points. In addition to the 16th points, he grabbed 9 of the team’s 45 total rebounds.

Coming off this win, it’s hard to deny that Miller hasn’t made a significant difference for Alabama as he has helped lead them to a 7-1 start this season.

Miller has shown that he has a strong campaign this season as he is projected as a top 10 pick for the upcoming 2023 NBA Draft. Some mock drafts even have him getting selected as the No. 8 overall pick.

As the season progresses, Miller’s stock will either rise or go down. However, Miller still has a lot to prove this season as he has yet to enter conference play, he has yet another opportunity in next week’s battle as Alabama takes on the newly crowned No. 1 team in the country, the Houston Cougars on December 10th.

Can Alabama recreate the same grit and resilience against Houston that they displayed against UNC? Brandon Miller will surely show up and make his presence known!