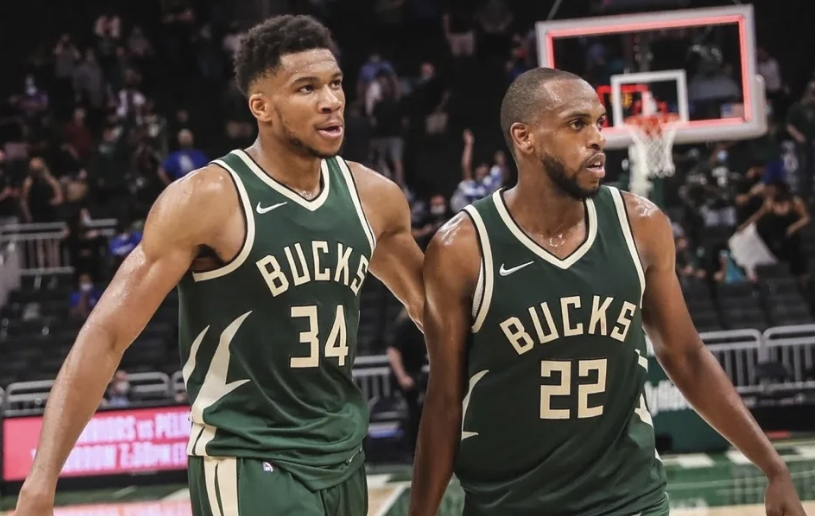 The past two years the Milwaukee Bucks have exited before reaching the Finals, despite being one of the most prolific regular season teams of the past ten or so years, behind the Golden State Warriors.

Before this season started, they realized that there needed to be a change, so they traded Eric Bledsoe and picks in exchange for Jrue Holiday, and signed Bryn Forbes and Bobby Portis to solidify their bench minutes. Bledsoe would look lost on both offense and defense when it came to the post-season, so shipping him to New Orleans in exchange for one of the most underrated two-way players in recent years was a huge upgrade.

Due to a shortened off-season, and in-season injuries, the Bucks finished third in the East but were clearly in the upper tier of teams with the Nets and Sixers. The Bucks have the league right where they want them. They don’t have the lofty expectations after being a juggernaut in the regular season to win a championship, so they are going out in their games and playing loose, but with lots of focus and intensity.

Last season, the Bucks fell in the warpath of the scorching hot Miami Heat in the bubble and exited in the second round of the playoffs. They had the unlucky first-round draw of matching up with Miami once again. Many people assumed that the Heat had the Bucks number, and it may have appeared so in game one, where the teams were grinding out possessions and it looked like the game would end with neither team scoring more than 100 points, but a last-second Jimmy Butler layup sent the game to overtime where it was once again back and forth, but the Bucks got the last laugh as Khris Middleton drilled a game-winning mid-range jumper with less than a second remaining on the clock.

The Heat came out flat the rest of the series and none of the next three games were even that close, with game two being over after the Bucks got out to a hot start and scored 46 points in the first quarter and never looked back from there.

The Bucks are of course led by 2-time reigning MVP and 2020 defensive player of the year Giannis Antetokoumpo. He had another great season, but for his standards, he struggled in the first round. He averaged 23.5 points, 15 rebounds, and 8 assists. He wasn’t a dominant offensive force, but that was because he didn’t need to be. He controlled the game with his defense and playmaking and trusted his co-stars to make plays when he gave up the ball. Giannis is in the process of trying to make his three-point shot respectable, and in this series, his shot was anything but that. He shot SIX percent on threes, and the Bucks still swept the Heat.

Unfortunately for the Bucks, their second-round draw in the playoffs is the mighty Brooklyn Nets, and their big three of Kevin Durant, James Harden, and Kyrie Irving. In the regular season, the Bucks were 2-1 against the Nets, but their two wins were when Brooklyn was without Harden. That being said, the Bucks matchup about as well as a team can match up with the Brooklyn Nets. Brook Lopez is a great rim protector when he isn’t switching onto guards on the perimeter. Giannis is one of the best defenders in the league and can guard 1-5 and is one of the only guys in the league who can contest KD’s pull-up.

Jrue Holiday is one of the best perimeter defenders in the league and can contain Brooklyn’s powerful guards in Irving and Harden, and PJ Tucker is an exceptional defender who will have the task of guarding Durant when he is on the court.

The Bucks did lose Donte DiVincenzo to an injury for the remainder of the playoffs. Donte is solid on the perimeter, and his loss will hurt, and Pat Connaughton will have to step up and give hard defensive minutes coming off of the bench. Khris Middleton is not just an incredibly efficient offensive star, but is solid on defense and will have to switch onto the big three, or maybe be tasked with Harden for the entire game.

Nonetheless, the Nets will score no matter who the defenders are, and the Bucks will need an increased scoring output from Giannis to defeat the Nets, but not all the weight falls on his shoulders which is a change from years past. Middleton has shown his ability to be the Buck’s closer in the playoffs, and Jrue Holiday can take over stretches of a game and allow Giannis to rest, or position himself for offensive rebounds.

Off the bench, the Bucks are much improved in terms of scoring options, as Bobby Portis averaged 11 points in the first round in less than 20 minutes per game, and Bryn Forbes can fill it up from three, as he is at 45% on the year. In the first round he averaged 15 points per game, and what he lacks on defense, he can make up for with three-point shooting on offense. As a Wisconsin resident and die-hard Bucks fan, I expect the Bucks to win this next series, but it will be a battle without Divencenzo.

Nonetheless, if the Bucks can get through the Nets, it will be one of the franchise’s biggest series wins in 50 years, and a finals victory would cap off a historic playoff run. Some are saying that this upcoming series is the NBA finals, and I agree, but the team that makes it out of this series will be battered and bruised and viable to be caught off-guard by a contender, no matter what conference that contender comes from.